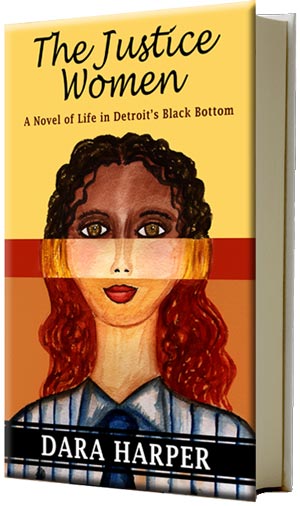 The Justice Women: A Novel of Life in Detroit’s Black Bottom

Years ago, when Black Friday wiped out the world around her and faces of every shade lined up at soup kitchens, Lucille was feasting on catfish and roast beef and ham too! In her line of work, her customers just couldn’t afford to make do without her. She demanded full price and they paid without protest. No one was better than Lucille and everybody knew it, just as sure as they knew the lyrics to Lady Day’s, “God Bless The Child.”

Lucille was thankful for fornication because it kept her in business. She didn’t mind profiting from the desires of others, but expressing her own passion had always been like swimming against the current. Lucille had never felt that glow inside. She recognized it in other women who smiled with their whole bodies and blushed at the mention of their lover’s name. Anyone with eyes could see joy radiating between their hips. But Lucille knew that some women went their whole lives without any glow at all and she accepted her fate as one of them.

The year is 1941. Prohibition is over, the world is at war and Henry Ford’s assembly lines offer access to the American Dream for the thousands who arrive at Michigan Central Station every day. In “The Justice Women”, Lucille encounters two kindred spirits who bring her closer to love and redemption. EXCERPT:
Since Aunt Mickie had moved to Detroit four years ago, she’d sent us eighteen pictures of herself standing next to buildings tall enough to eavesdrop on clouds. Mama looked at them so often that she smudged them with her sweaty fingers and bent their corners. One day, Mama was holding one of the photos and she said, “Seems like Mickie got a different smile since she left Georgia.”

I stood over Mama’s shoulder, staring at the picture. Aunt Mickie was dressed in a white coat and even though the picture was taken from a distance, I could still see the black hole in the front of her mouth where a tooth should have been. Same Aunt Mickie. Same smile. But Mama saw something I couldn’t see and she kept on looking, as if she wished for that same smile.

At the train station, I wanted to ask again why we were leaving town. But I swallowed my curiosity along with some spit because children were supposed to be seen and not heard. Even though I had the body of a woman, I was still considered a child. The three of us boarded the Colored Section of the train bound for Detroit.

BOOK DESCRIPTION:
The follow-up novel from Off-Broadway playwright and award-winning filmmaker, Dara Harper is set in the author’s hometown, Detroit, Michigan. This coming of age story follows 15-year-old Natalie Tillman’s journey from Thomasville, Georgia to the Motor City in 1959. She and her parents move into a crowded west side flat with six other family members.

Natalie struggles to adjust to life in the north, busy streets, integrated schools, beautiful cars, flirtatious men and freezing weather. The house overflows with food, laughter and music. But there’s also abuse, alcoholism and painful secrets. When the unthinkable happens, Natalie is forced into adulthood. Her tale reveals the consequences of honesty and the burden of heroism. 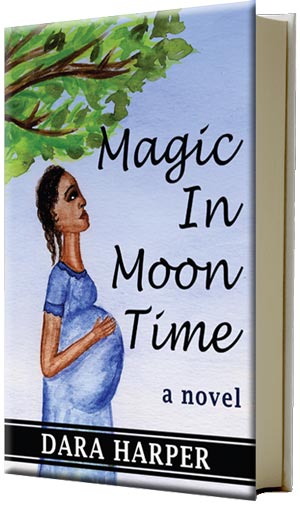 EXCERPT:
Frustrated and restless, Justine got up and walked over to the dresser. She studied her reflection to be reminded of her deceased father. She had his nutmeg complexion, slender nose and high cheekbones. But she had not inherited his soft, wavy hair. The frizzy mess atop her head came from Mama’s side of the family.

She had her mother’s build too, generous hips and thighs. But unlike Mama, Justine had no breasts to speak of, they were about the size of baby tomatoes. Mama always assured her, “When you start having babies, you’ll grow some, don’t worry.”

Justine dropped to her knees and lifted her head to heaven. “Papa, you the only man that belong in this house. Mama got no business marrying Mr. Gaines. Papa, send her a sign. Let her know that nobody is gonna lover her the way you did.”

BOOK DESCRIPTION:
Off-Broadway playwright and award-winning filmmaker, Dara Harper invites readers to Angelville, Florida, a fictitious city inspired by her childhood summers spent in the south. “Magic In Moon Time” is a powerful story of passion, faith, redemption and forgiveness. This novel is about a woman’s self-discovery and the heartache and joy that follow.
The year is 1929. The locals all take notice when Justine Phillips arrives in town, a beautiful woman with a shameful secret. She finds love but her marriage is soured by infertility. After nine years of trying to conceive, she pays a visit to a witch doctor who her mother-in-law swears is the devil’s disciple. Now, she must make a life changing decision. 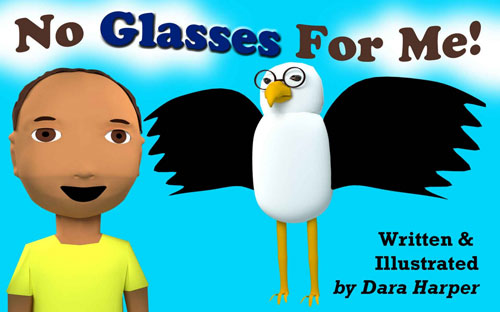 No Glasses For Me

BOOK DESCRIPTION:
Ebo, the eagle is ashamed to admit he might need glasses. What if the other eagles laugh at him? What if he doesn’t like how he looks with glasses? Can his friend, Booker help Ebo to see a funny and important truth? This book is colorfully illustrated with 3D images.